Makar Sankranti is a harvest festival celebrated across India in the month of January. It is known by different names in different states. But essentially, the festival is about farmers showing reverence to Surya, the Sun god. Sankranti falls on the day which heralds the end of winter and start of long summer days.  In some states, such as Tamil Nadu, Pongal as it is known there, is a four-day festival. The farming community prays for a good harvest season on this day. Sankranti is not only about humans, but also about cattle that have always played an important role in farming. In many regions of India, the farmers involve their cattle in rituals.

One such ritual in Karnataka is known as Kichchu Haisodu (Kichchu Haayisuvudu). Bulls are made to jump over fire, first. After the bulls, other cattle like cows, buffaloes and sheep are made to walk across whatever is left of the fire. The owners of the cattle cross the fire along with the animals. So in that sense, this is not a ritual which is meant to hurt the animals. Also, the animals and men take no more than 5 to 10 seconds to cross the fire. This brief contact with the flames does not harm their skin, feet or hooves. Some of these bulls are well decorated with flowers and balloons which neither catch fire nor get burnt during the crossing. This information should hopefully satisfy those who think that the Kichchu Haisodu is harmful to the animals. 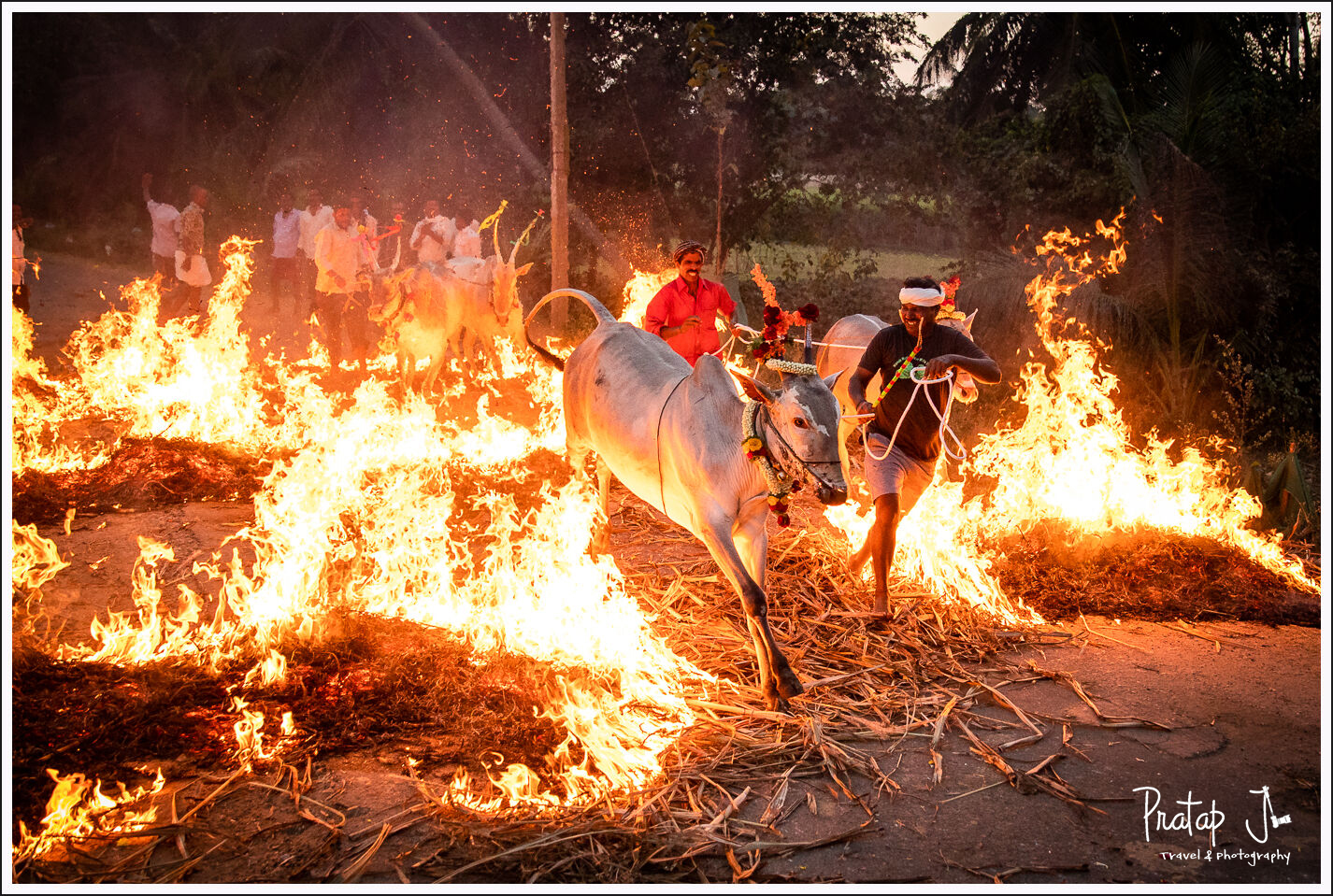 My friends and I drove to Mandya from Bangalore on the day of Sankranti to shoot this event. We reached one of the villages near the town of Mandya at around 4 pm. As we walked across the narrow village roads, we saw many households preparing their cattle for Kichchu Haisodu. The menfolk were decorating the bulls with flowers, balloons, paint and other paraphernalia. The kids and the women were helping. The whole village comes together for this event, and there was a sense of adventure in the air. In small villages, festivals and fairs are more of a community affair, than a day where one doesn’t have to go to work. It was nice to see Kichchu Haisodu bringing the old and young together near the village temple. 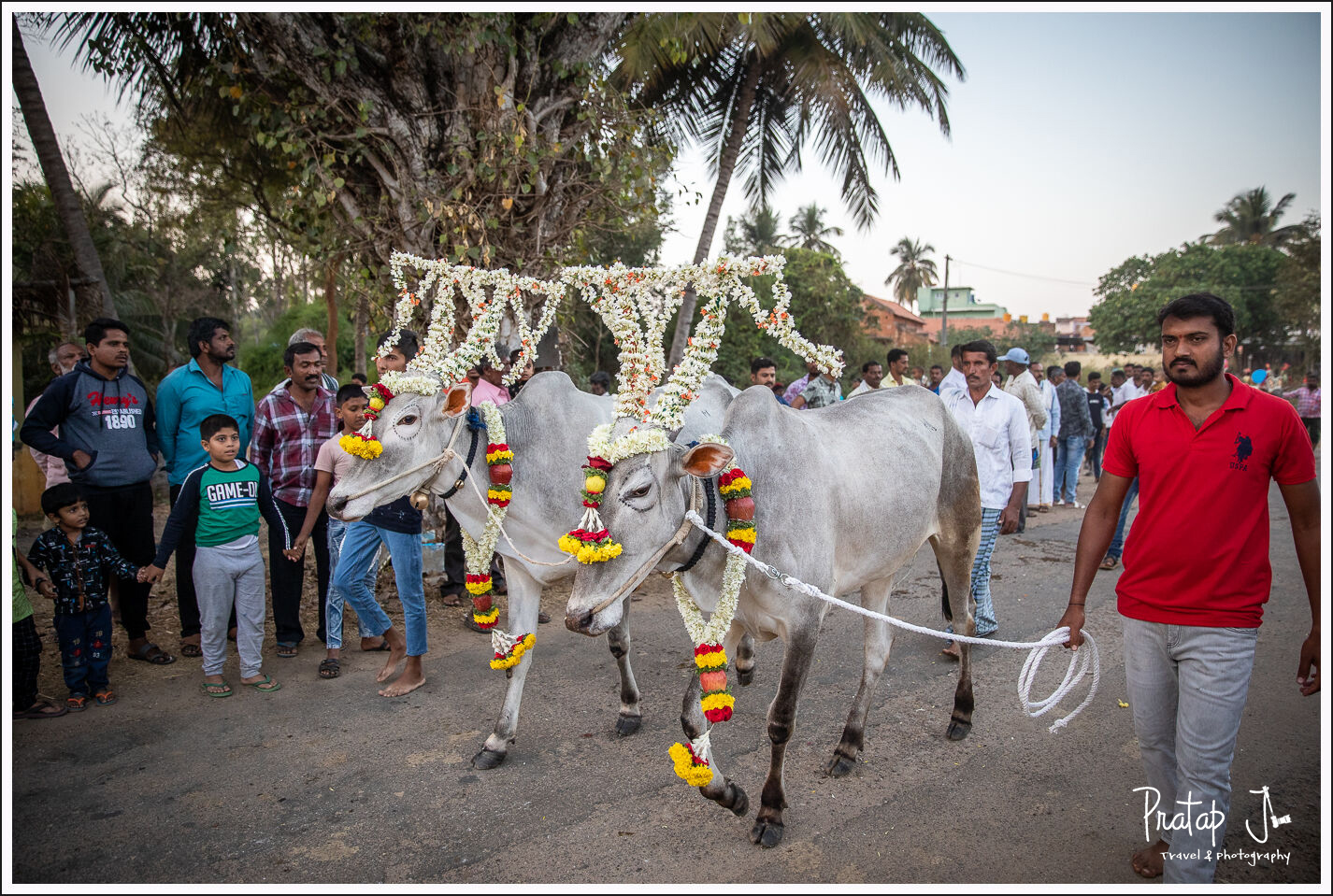 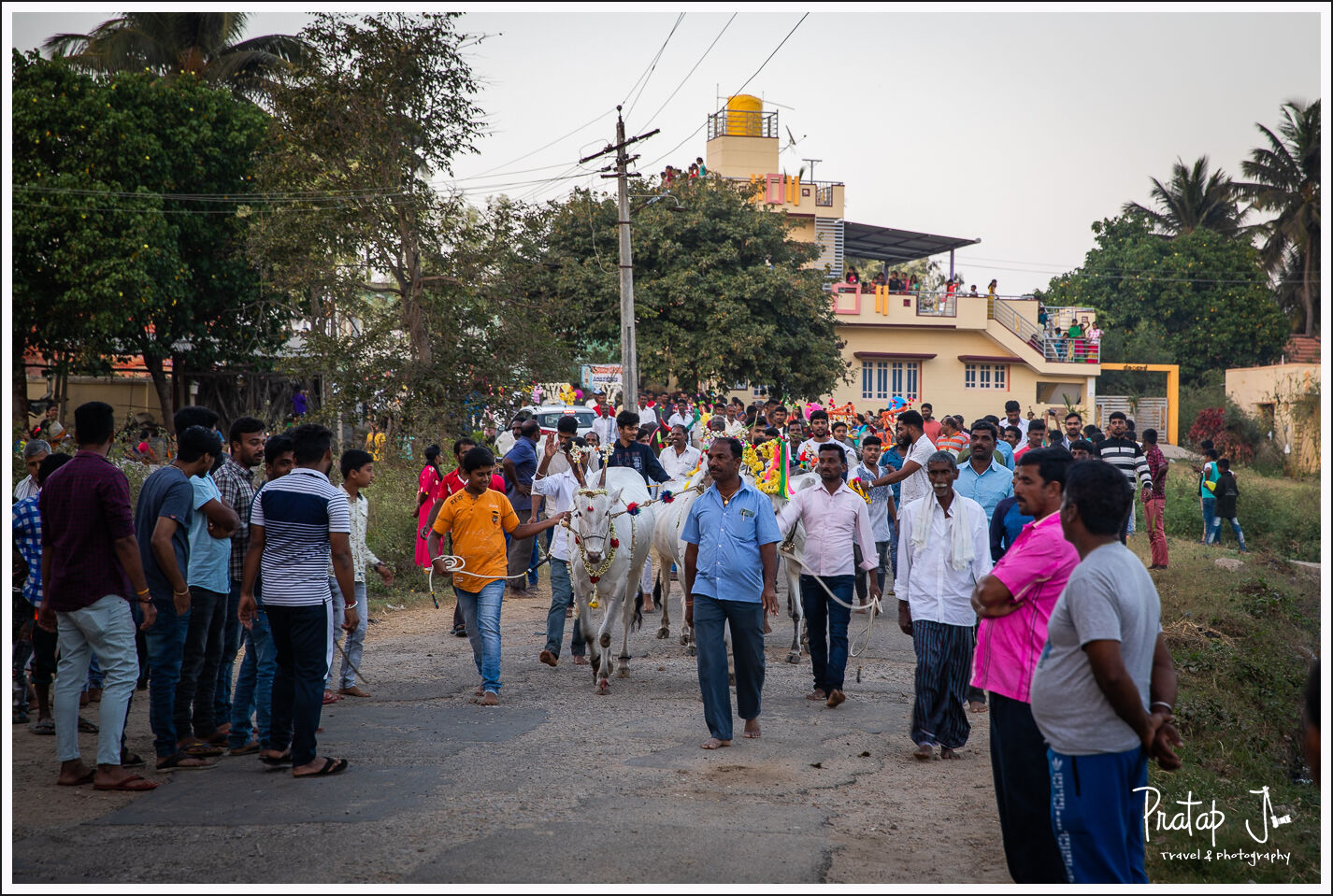 After the decorations, a small pooja was done to these animals. This is to show respect to the beast of burden which helps the farmers in the field. In traditional times, the bulls were used to plough the land. These days, machines perform this task. In spite of the bulls being replaced by machines, several households continue to keep these animals and feed them through the year. Some households that did not own bulls were decorating their cows, sheep and goats. These animals don’t jump over the fire. Instead, they walk over the remains of the fire after the bulls have finished. 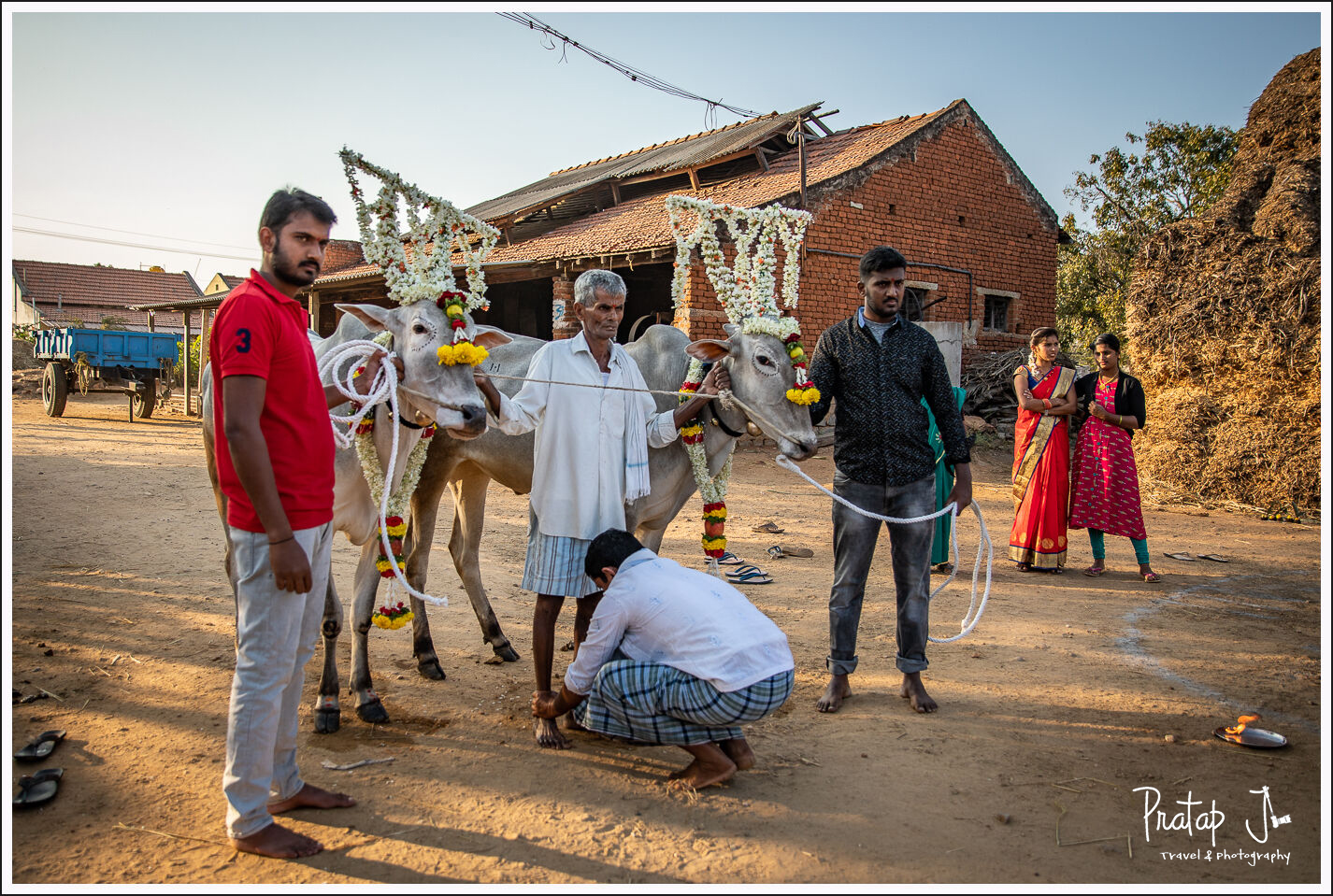 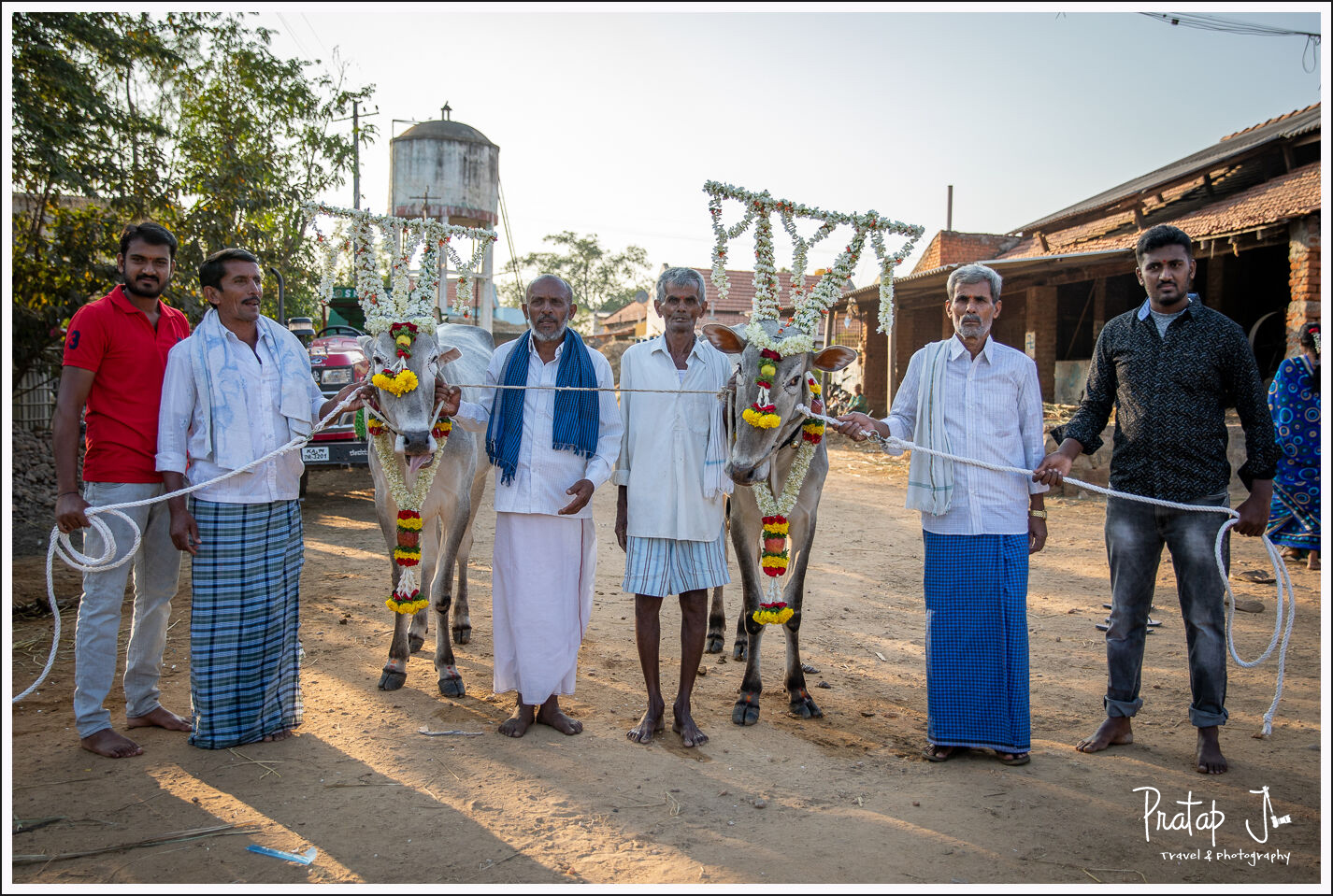 There are a few theories as to why this practice originated. One such theory is that the fire and smoke helps cleans the under body of the animals of ticks and fleas. Another reasons for making the animals jump over fire is to make them fearless, in the event of a fire accident near their sheds. Whatever the reason, the symbolic relationship between, the Sun God (Surya) and fire is unmistakable. By acknowledging the contribution of not just the God in the heaven above, but also the mute animal which toils in the field, our traditions have always been about reverence. 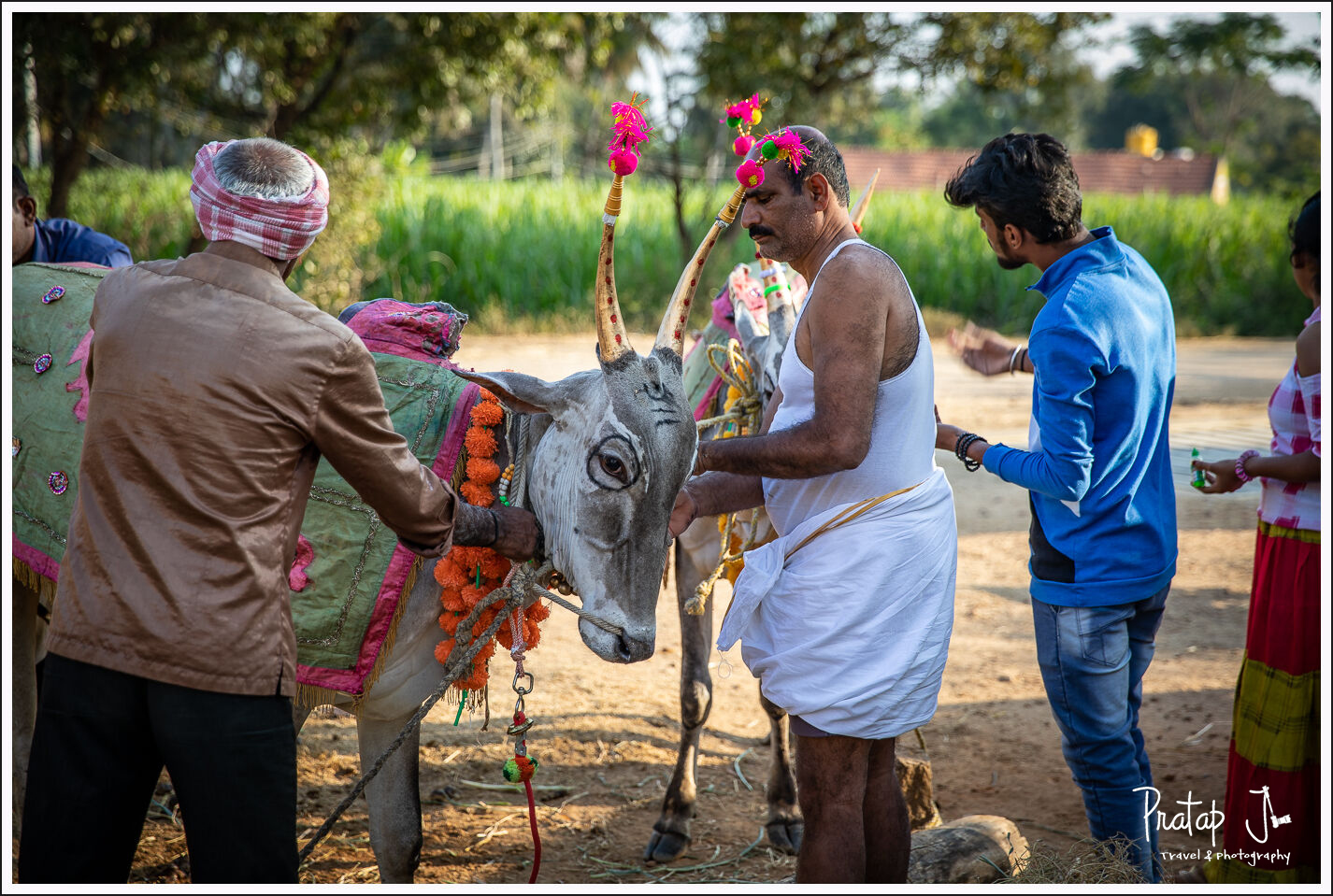 Carrying a DSLR or a mirrorless camera to a Kichchu Haisodu is highly recommended. Depending on the size of the crowd, you may need to stand far away to capture the bulls running over the fire. A zoom lens like a 70-200, will definitely help here. Because these events happen during sundown, you will need to crank up your ISO and use a fast shutter speed of at least 1/800 to freeze the running bulls in your photo. A slower shutter speed will get you blurry photos. 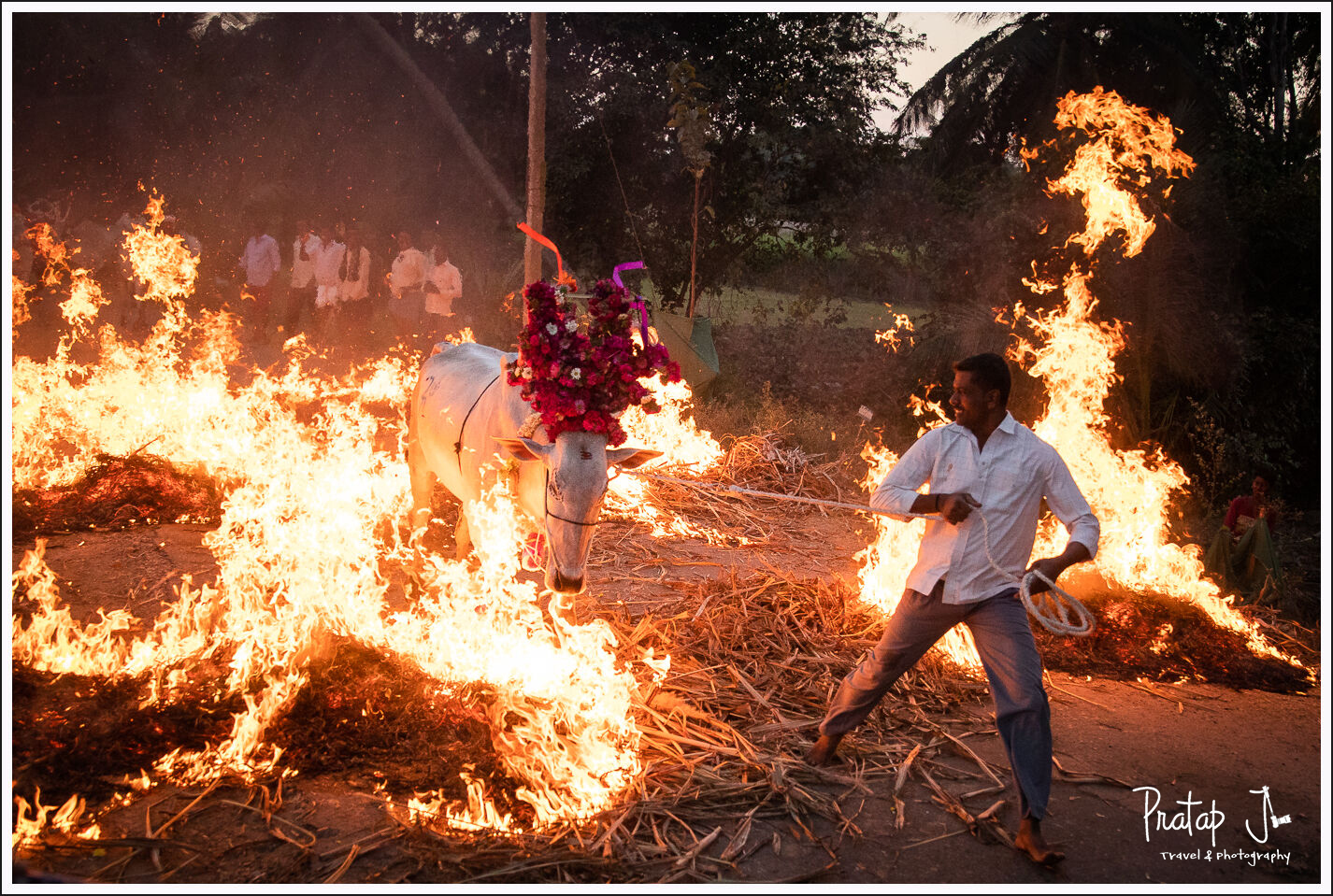 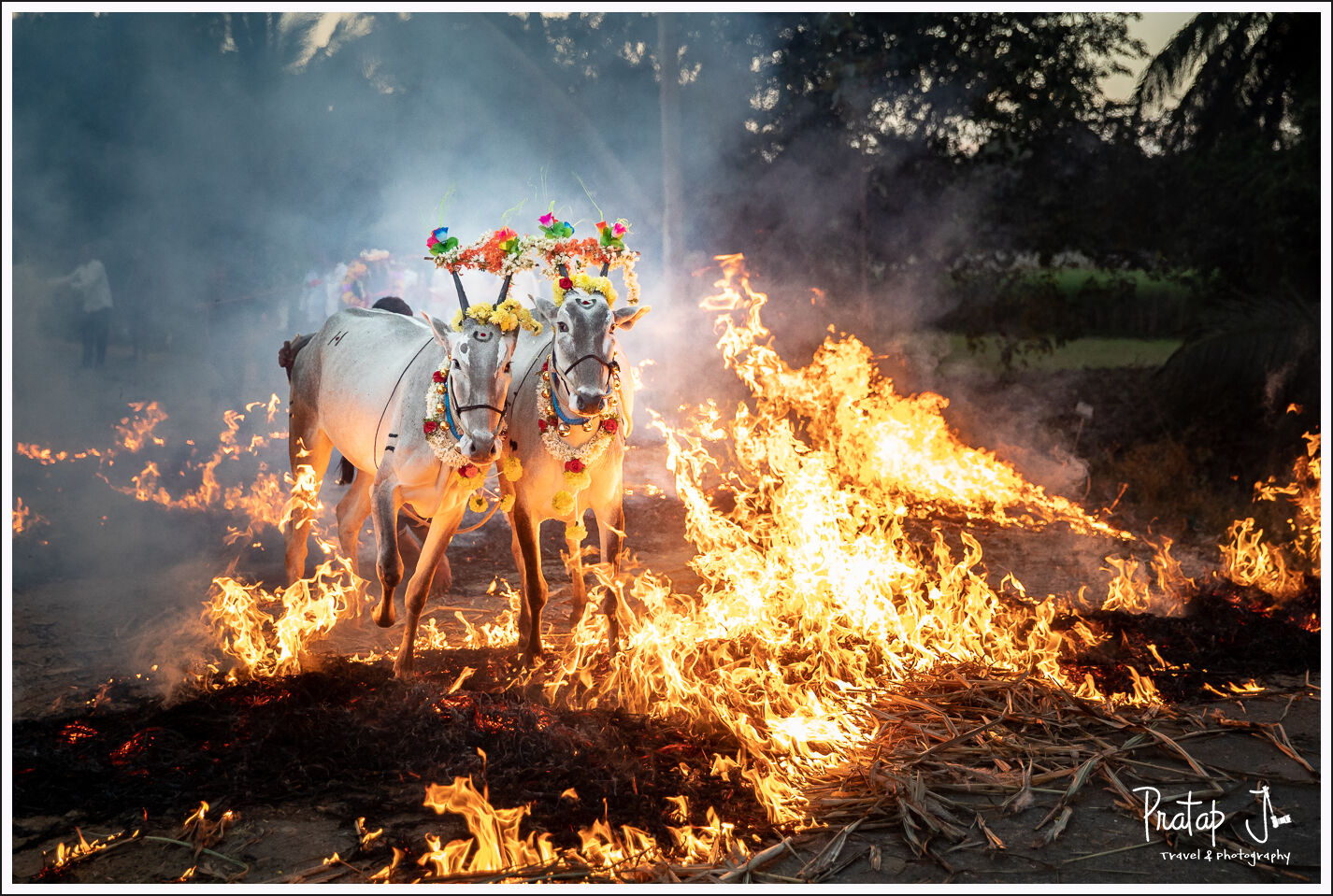 Mandya district is a good place to go shoot the Kichchu Haisodu because there are several small villages which have their own event. If you are lucky, you may get a chance to shoot more than one such event on the same day, if you travel around Mandya. There is no fixed time as to when this event occurs, but it is usually between 5.30 pm and 7 pm. The villagers are generally friendly and do not object to outsiders. Of course, this does not mean that you take your whole local photography club and land up in the small village in large numbers. If you are many in number, look for an organised Kichhu Haisodu event.  There is one which takes place in a large field in Mandya. We wanted to avoid this urban setting, and hence went to a small village. We were four of us, and we were interacting with the locals to understand more about the event and their way of life. One of them even invited us to their house and offered us refreshments.

If you cannot travel that far, look out for gatherings near traditional temples in the city. The 400-year-old Patalamma Temple near Lalbagh in Bangalore hosts this event on the day of the festival.

Here is a short video of how the village celebrated Kichhu Haisodu.