Astrophotography is a trending topic and close to the heart of nature lovers and those who like to spend time outdoors. Modern cameras are capable of shooting noise-free pictures at very high ISOs. The ability to capture clean images in low light (and hence at high ISO) is essential to shoot the Milky Way and other celestial objects. There are some nice spots in India where you can capture the night sky. Here is an astrophotography guide that explains what you need to get great night photos with any camera that can shoot in manual mode.

Astrophotography is a very broad term and can involve shooting a variety of celestial objects after dark. For most of us who do not own specialized equipment, astrophotography is limited to shooting star trails, the Milky Way and the moon. If you own, or have access to a star-tracker or a telescope, you can shoot deep sky objects which are much farther away in the heavens above. Capturing deep sky objects involves shooting multiple, long-exposure photographs through a tracking telescope and using advanced processing techniques to create the final image.

We will keep it simple and try and shoot what we can normally see with the naked eye at night. A few examples:

Star Trails in the Great Rann of Kutch And here is a timelapse of the Milky Way rising over a period of 6 hours:

While it is important to have a camera that can shoot in manual mode to get good astro photos, it is also essential to consider the following when you choose your equipment:

It is not necessary to shoot with a DSLR. My favourite camera for astrophotography is the Sony RX100 Mark IV which is an advanced point and shoot. It has a fast aperture of 1.8 and can shoot clean images in RAW format at high ISOs.

The most essential step for astrophotography is planning. How should you pick your location and plan your shot?

In India, traveling to higher altitudes will get you clear skies that are free from air and light pollution. Places like Ladakh and the high mountains in Uttaranchal and Himachal are great for astro work. In the plains it is nearly impossible to get clear skies in cities and towns. The best thing to do would be to drive a little away from areas of human development. 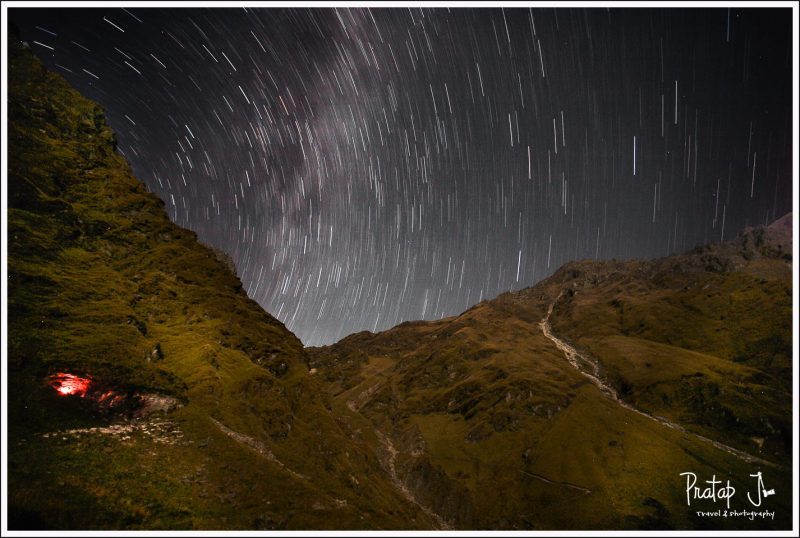 Star Trails over Kuari Pass in the Himalayas

The mother of all photography planning apps is Photo Pills (iOS and Android). It is an all-in-one tool that can help you, calculate exposures, find the Milky Way, North Star among a bunch of other things.

There are different types of astro photos that you can take. In all of these types, the idea is to get the basic exposure right in the camera. Once you get the exposure correct, you can fine process the photo in a computer to extract more details and make the celestial objects stand out.

Apart from capturing the night sky, you can even try light painting to make interesting astro photos. Mixing steel wool photography with a star-studded night sky is a popular idea.  In all these methods it is important to balance the exposure from ambient and artificial light. Use the settings given here as a starting point and experiment based on the situation in the field.

To capture the Milky Way you need to release the shutter for long durations to get the maximum amount of light into the sensor. Since you shoot when it is dark, the exposure times are generally in the order of 20 to 30 seconds when the aperture is larger than f2.8 and the ISO higher than 800. The Milky Way is faint compared to the stars, so do not try to mix ambient light when shooting for the first time.

You must set the lens to manual focus and focus to infinity. Auto focus would fail in low light. If your lens does not have an infinity focus marking, find out the infinity focus point during daytime and make a note of it by placing a dot in your lens.

Here are typical camera settings that you can start with when it is a really dark night with no artificial light:

Needless to say, you should mount your camera on a tripod before you click. You can never hand-hold the camera when the shutter speed is slow. After you shoot, review the photo on the back of the LCD to check if the exposure is correct. It helps to use the histogram in your camera to see if the image is under exposed or over exposed. You can also check to see if the Milky Way appears correctly in the photo and if the stars are in focus. The stars and Milky Way may not look as clear and evident as you see in the photos below, which is fine. Processing them later in a computer will bring out the colours, clarity and contrast of the galactic core.

After you review the image, adjust the exposure and focus settings based on what you see. If the image looks over exposed, reduce the shutter speed and ISO instead of narrowing the aperture.  When the shutter speed is longer than 30 seconds the celestial objects don’t appear sharp. The earth’s revolution causes them to be blurry. 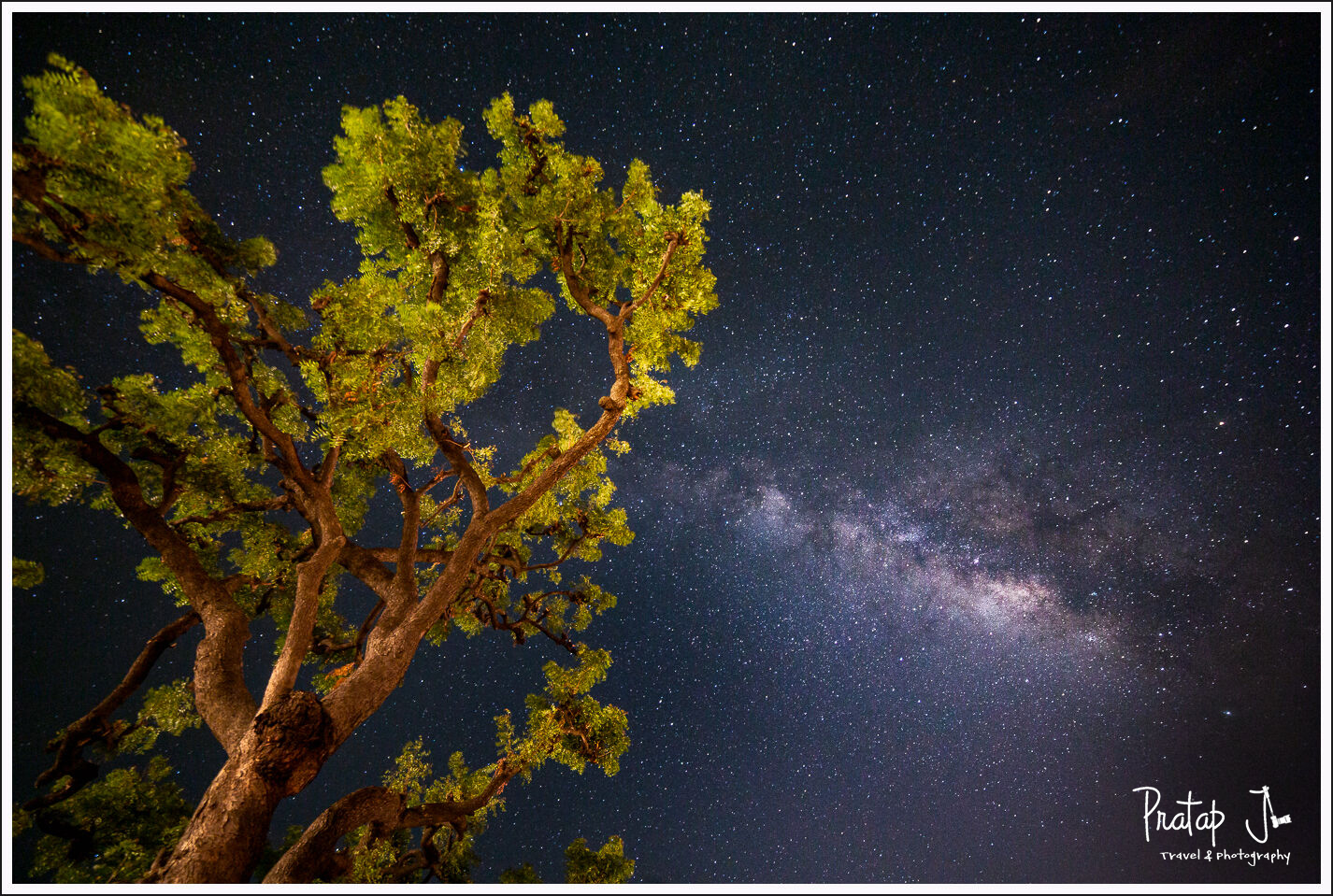 The ancient town of Badami, in Karnataka, India. This was once the seat of power of the Chalukya Dynasty. 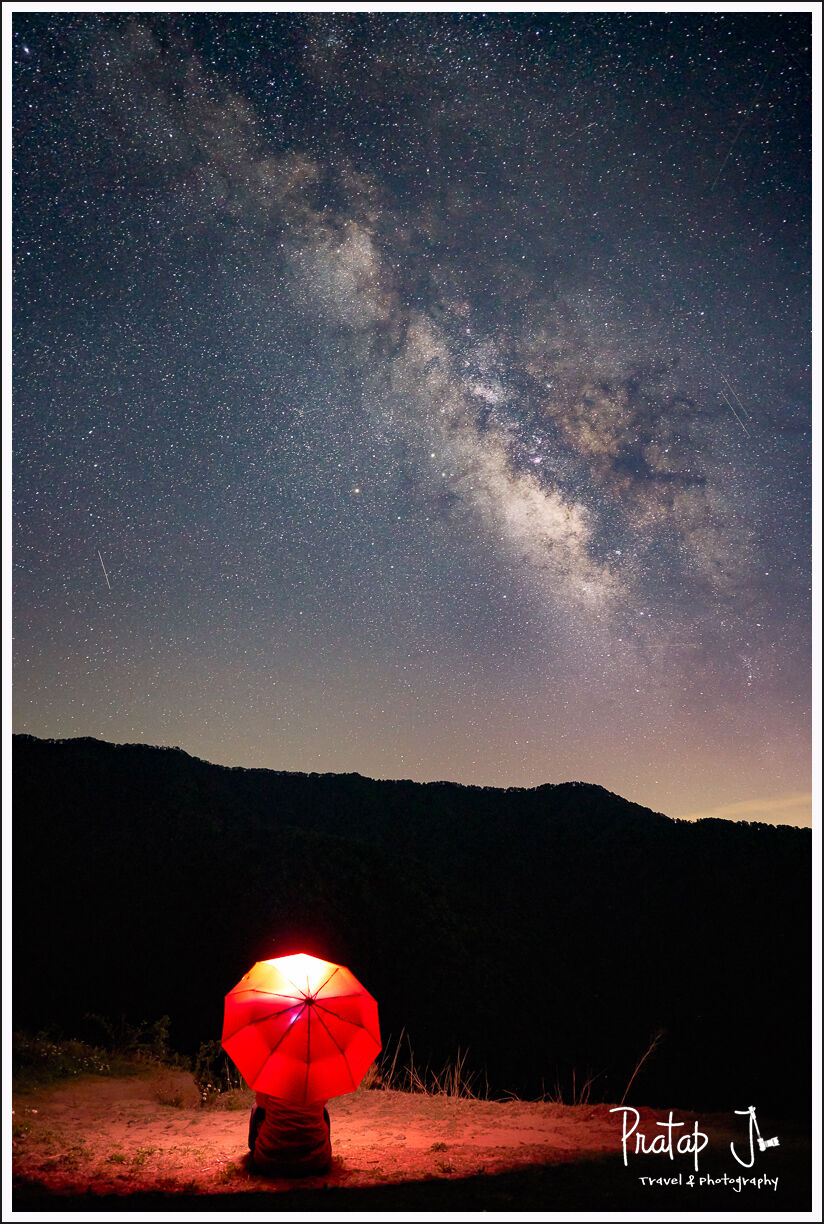 Tip: Use a remote shutter release or the built in timer your camera to avoid shake induced by your finger when you press the shutter button. 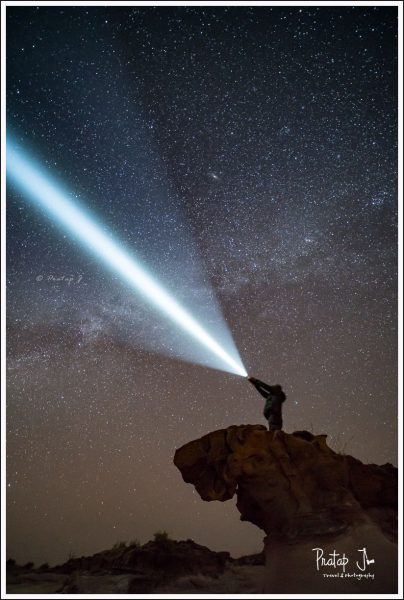 Night Sky in the Great Rann of Kutch. The winter Milky Way without the galactic core is visible in the sky.

To capture the movement of stars in the sky as trails, you need to shoot for at least 45 minutes or more. There are two methods by which you can achieve this.

In the first, less preferred method,  you could leave the shutter released for the entire duration of the shoot using the bulb mode on your camera and an external remote. In method two, you shoot several photos at regular intervals over a period of 45 minutes or more. Each photo is of a much shorter duration like 30s. Later, you stack the individual photos using a software like StarStax.

The disadvantage of using the former method is that having the shutter released for long periods of time causes the camera sensor to overheat and the battery to drain faster. The most preferred method of shooting star trails, hence, is to take individual exposures  at regular intervals and combine them later.

You can use the same camera settings as for shooting the Milky Way to shoot the individual exposures. Use an intervalometer to take photos at predetermined intervals. Set a 2 second gap between shots and take at least 70-100 photos that you can stitch later. If the exposure of each photograph is 30 seconds, and you have a 2 second gap in between photos, you will need approximately 53 minutes to shoot 100 photos (32 seconds x 100 = 3200 secs which is approximately 53 min). During this time, you must take care that your camera lens does not get fogged up due the weather conditions and you don’t move the camera or get cloud cover in your frame. Both of these will ruin the final image. 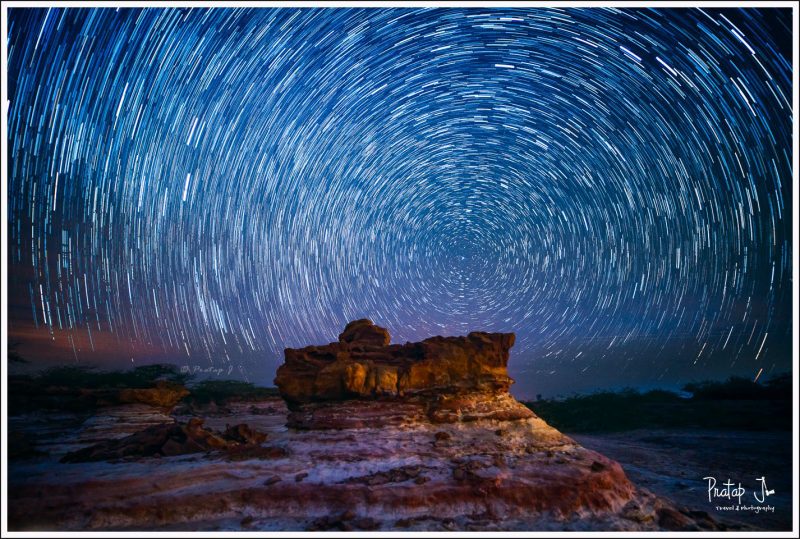 To get concentric star trails around your subject of interest you must compose taking into consideration the position of the North Star because all other stars revolve around the North Star. 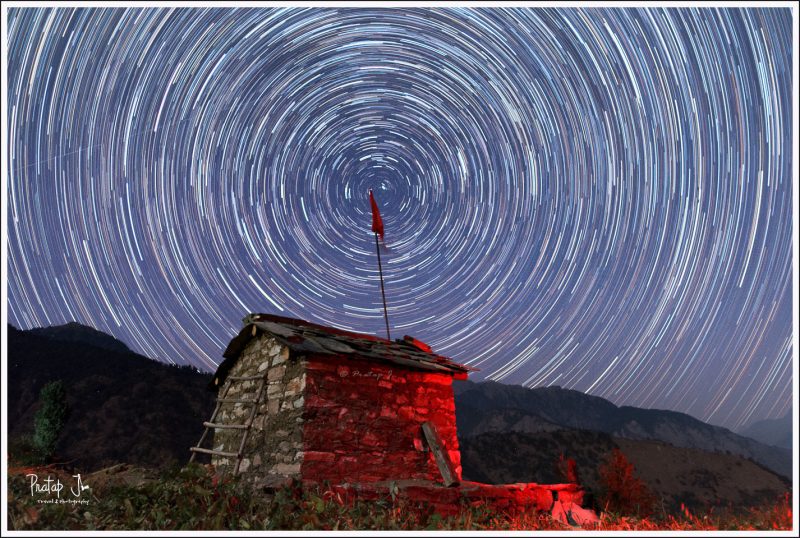 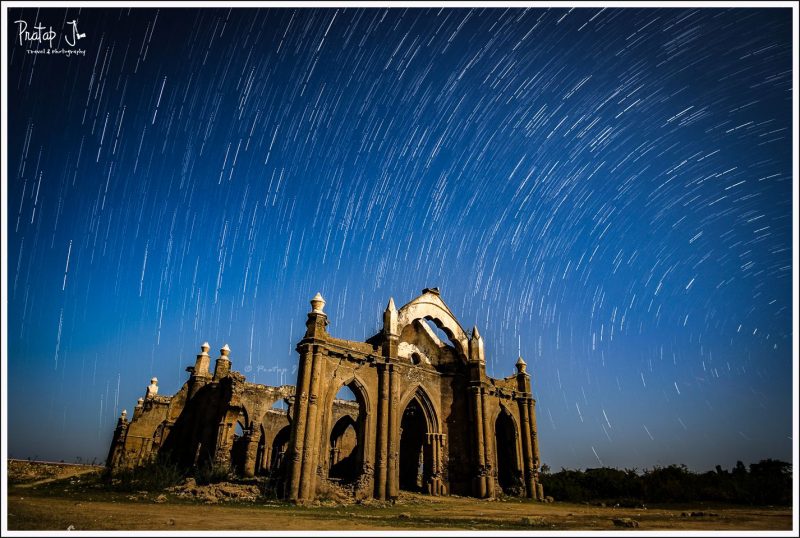 Your composition may not always allow you to capture concentric circles. That should not stop you from attempting to shoot trails. 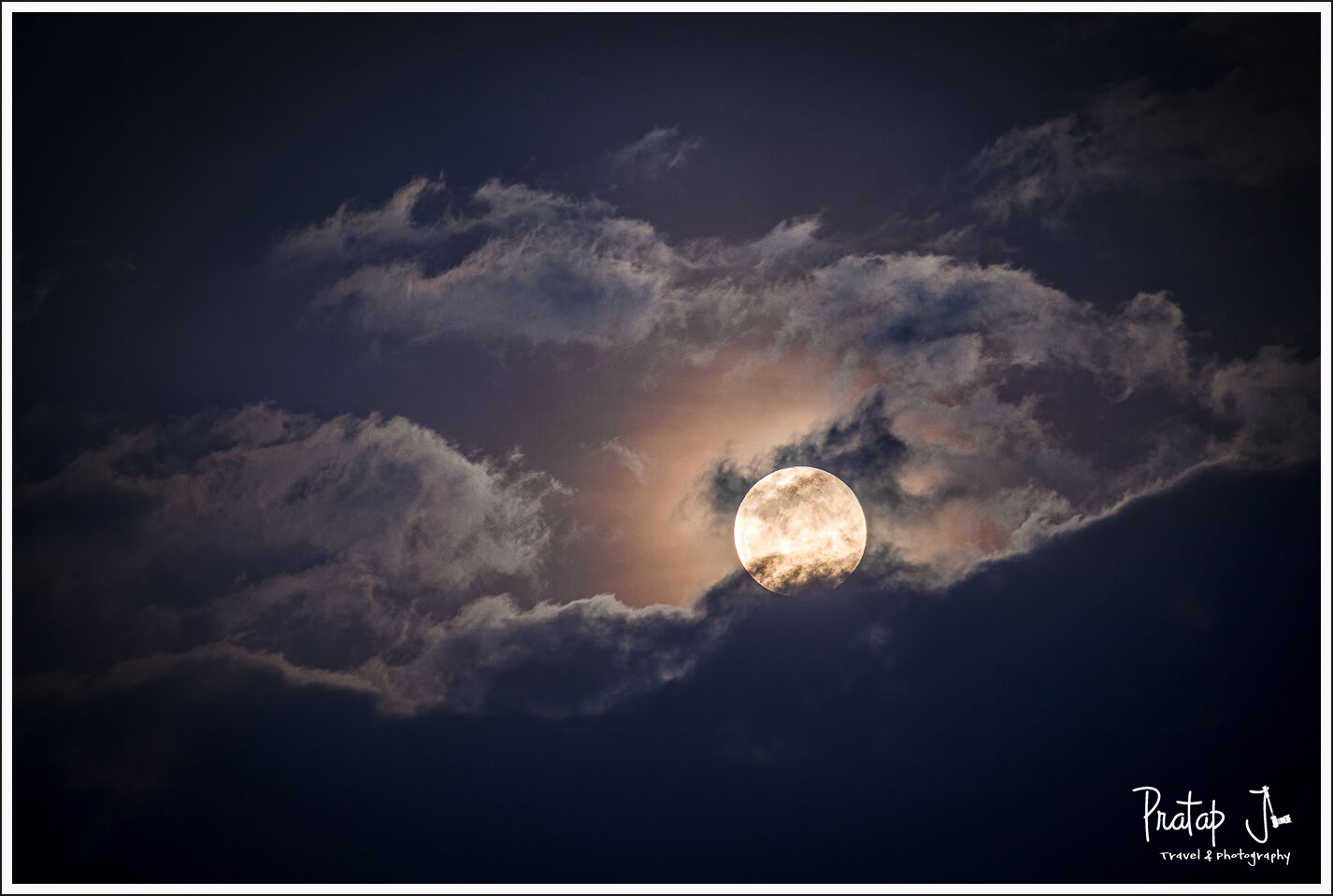 Full Moon Over a Snow Laden Mountain in the Himalayas

It is not necessary to always include the Milky Way or do star trails when you shoot the night sky. You can take very nice landscapes photos with celestial objects in the frame. The settings here then varies based on how you wish to balance the ambient light from man-made objects and the light in the night sky. A good starting point would still be the settings given above. 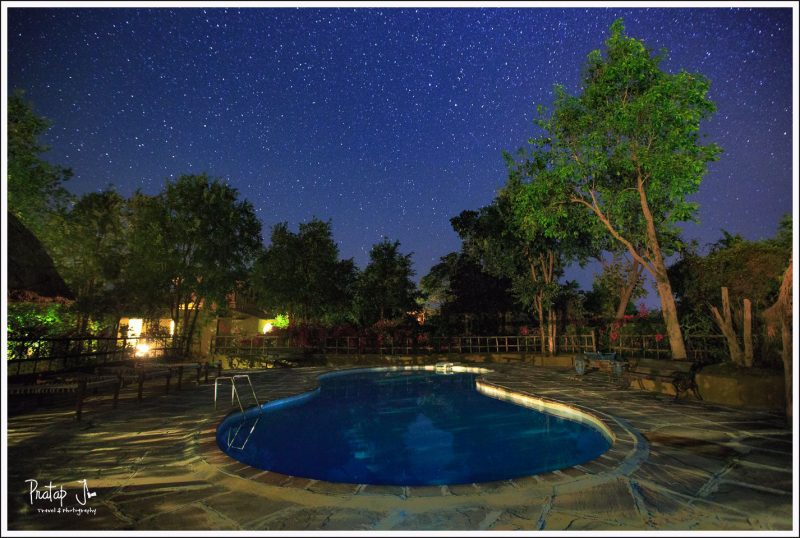 Real estate photography at night with a sky full of stars 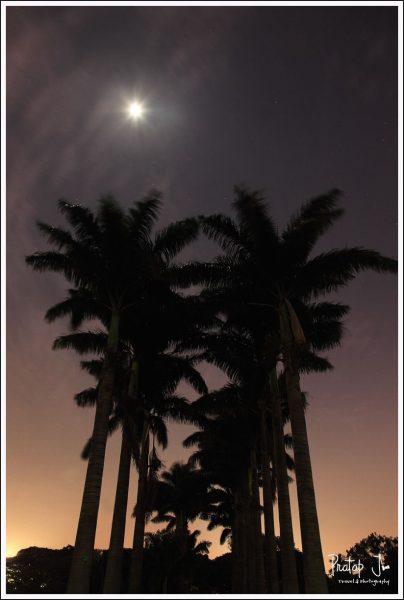 Full Moon over Lalbagh in Bangalore 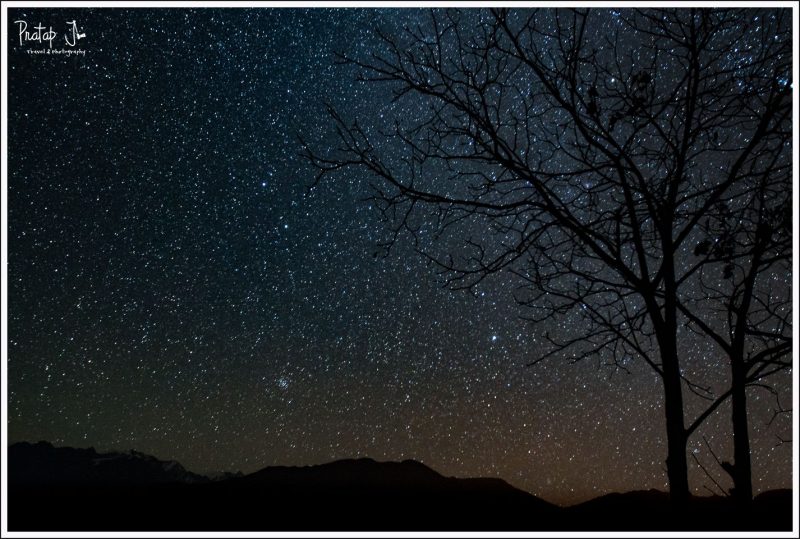 Clear Sky in the Himalayas

Astro photos need extra care in the digital darkroom. My software of choice for post-processing is Adobe Lightroom and Adobe Photoshop. But there are several tools out there. Always shoot in RAW to get the maximum quality after image processing. Here is an overview of the steps involved in processing an astro photo:

If you are combining images in StarStax, process the individual photos first before running them through StarStax. This is where the batch processing power of Lightroom comes in handy. Here is an excellent video tutorial on how to shoot and process star trails from start to finish. 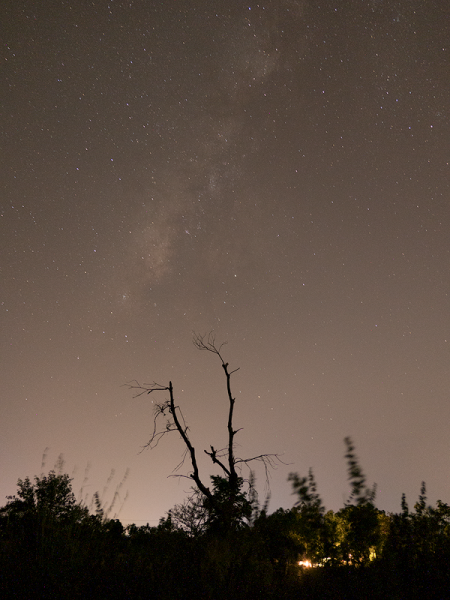 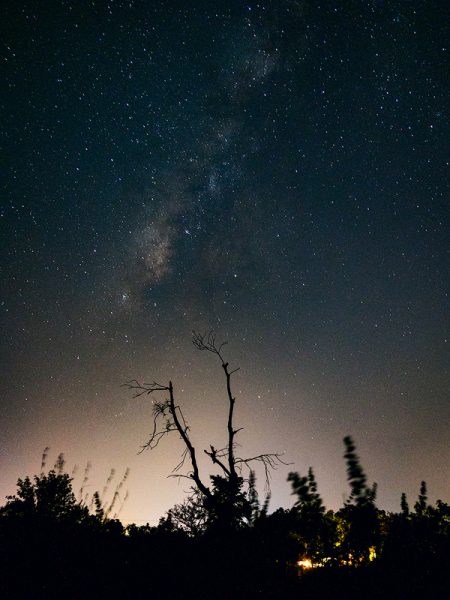 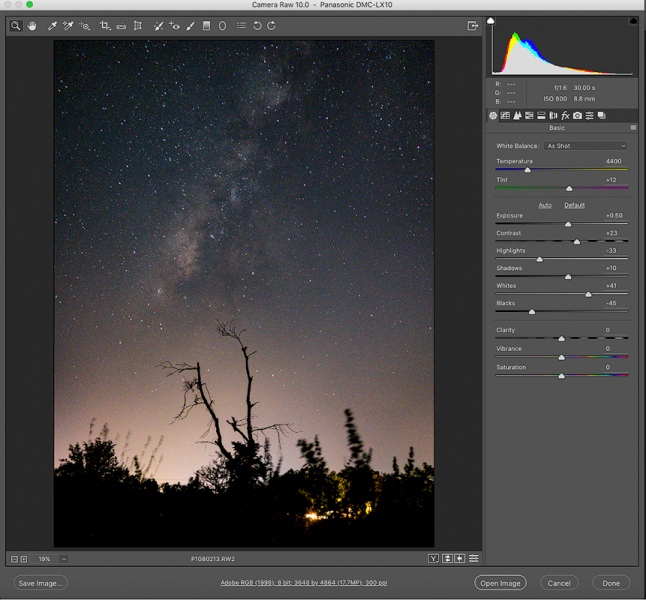 You can even go to the extent of compositing your photo to replicate something you had in mind but could not achieve in the field. Here is an example: Astrophotography is fun and addictive. But remember that there are very limited opportunities in a year. In India, the monsoon season coincides with the months when the galactic core of the Milky Way is the brightest. There are only a handful of new moon days in any calendar year. There is generally a lot of light pollution around. So it is essential to plan your shoot before hand. Also take safety into consideration when venturing away from human development.

While it is not possible to shoot good astro photos inside Bangalore city, a short drive towards the outskirts presents excellent opportunities. For example, these photos were taken near the town of Kanakapura: 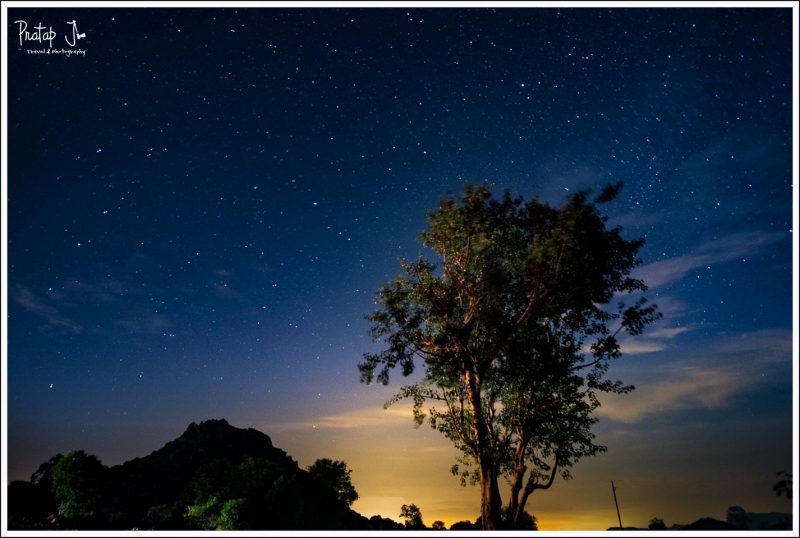 Stars against a Tree near Kanakapura 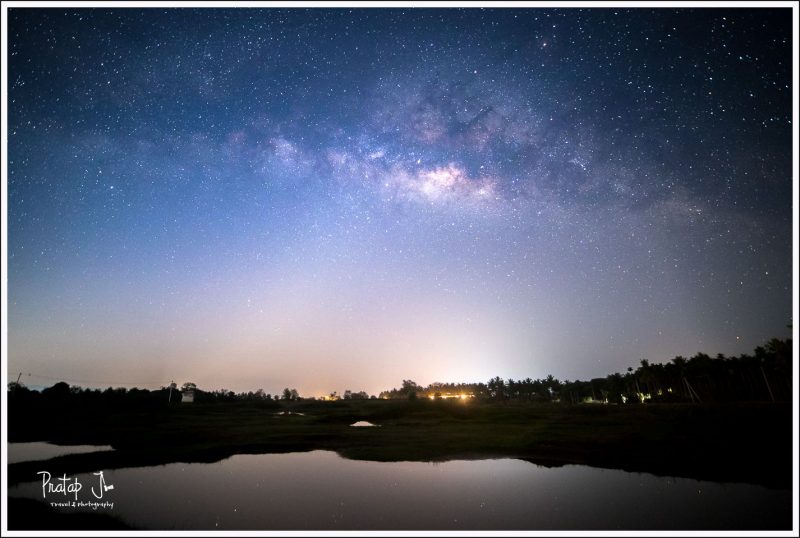 A view of the Milky Way close to Bangalore

And this was taken on Mysore Road: 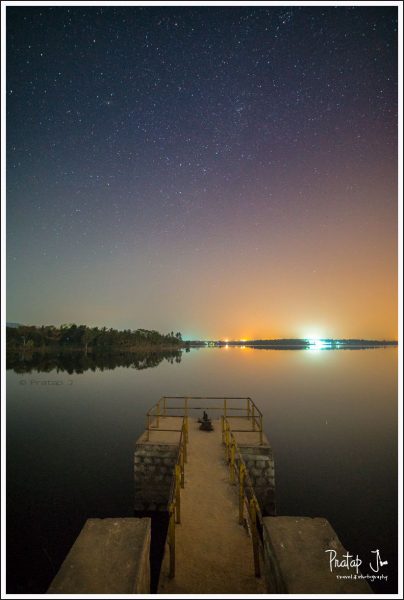 BONUS TIP IN THE NEXT PAGE – HOW TO SHOOT THE MOON