Hoysala style of temple building thrived in the South Deccan plateau, currently the region of Karnataka, between the 11th to 14th century. There are plenty of Hoysala temples here – both known and unknown. Among the well known temples are the ones at Belur and Halebid. Among the lesser known ones is the temple in this photo, where I got a chance to capture the Milky Way. Beautiful intricate carving and aesthetic structures are the hallmark of Hoysala temples. Most of them are near the city of Hassan.

This photo represents the peak of human intelligence, but at different periods of time. Going by the number of temples that have stood the test of time, it is safe to say that our ancestors were experts at creating these beautiful structures. Modern day science and technology on the other hand has advanced to a stage where photographs can capture the night sky without special scientific instruments. To me, this photo is a tribute to the great minds from their respective eras.

To capture the Milky Way, you need to shoot at a very high ISO and for at least 10 – 20 seconds. This is possible only when you make time for it. The Milky Way is not visible with such detail with the naked eye. But if captured right, the image can be processed to bring out the Milky Way and stars to reveal a sight that is to put it simply, out of this world. In this photograph, the galactic core of the Milky Way is above the gopura of the temple. Jupiter, the bright star near the galactic core, is also nicely aligned with one of the gopuras. I photographed with a Canon 5D Mark IV and Irix 15mm f2.4 lens. The temple was lit by street light. You can watch a short behind the scenes video of this trip: https://youtu.be/h4tjqKB1gWs 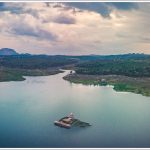