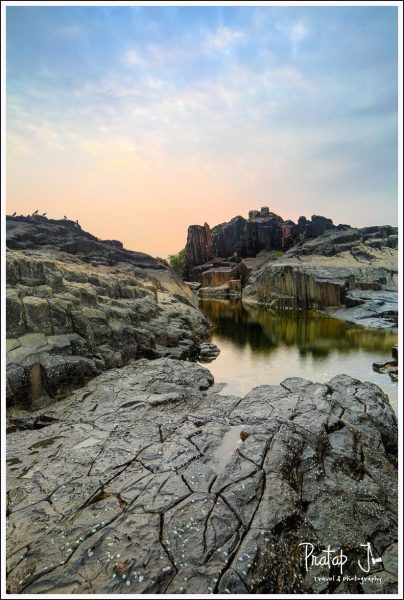 St Mary’s Islands are a group of four islands in the Arabian sea, close to Malpe beach in Udupi. Tourists can visit one of the islands, called Coconut Island. Geometric rock formations, as if man made, are unique to this island.  These rock formations are a result of rhyolitic lava flow from the Deccan Trap Complex. There are only four such rare locations, with these rock formations, in the world. These polygonal joints developed 85 million years ago when hot lava flow got pound in a depression. They look very similar to a dried up lake or river bed.

We hired a ferry to visit St Mary’s Island at sunrise. Normal tourist ferries start operation later in the day, when the sun is generally too harsh. Our goal was to have the island to ourselves, devoid of tourists, and make the best of the morning light. We reached St Mary’s Island at 6 am, but it was unfortunately too dark and cloudy. But because we were the only inhabitants in the island, a sense of tranquility was everywhere. We watched the colors of twilight change, while enjoying the gentle breeze and listening to the sound of crashing waves. Slowly, a faint pinkish glow began to illuminate the horizon. This light, which you can see in the photograph, lasted only for a few minutes. The frame I was able to make in the short duration represents our efforts of waking up before dawn, hiring a ferry and being at St Mary’s Island to watch the sunrise. 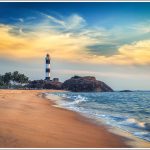